A Winter's Day in the Delta

In 1973 Don Henley sang “the sky won’t snow and the sun won’t shine” and this particular January Thursday was that kind of a day.  Leaving Memphis via the “old bridge” I was treated to a great view of the continuing flooding on the Arkansas side, water stretching all the way up to the levee.

Along the Interstate, near Clarkedale, Arkansas, a flock of geese, mostly snows, had found a field worth visiting.  Some of them nervously took flight as I took a few shots, but they didn't go far.  The mild temperatures and plentiful food sources made eastern Arkansas attractive to them. 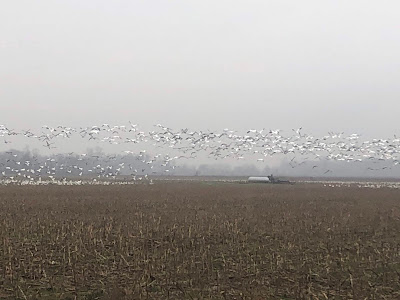 This was a great farmer’s rain . . . slow and steady, replenishing the earth for the coming spring planting.  The amount of water this region has received in recent months is, if not historic, certainly remarkable.  Many of the fields have as much water as they can take, and are shedding water into ditches, across roads, and even backing up into the odd yard. 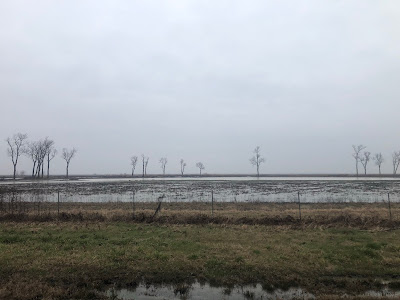 I purposed to drive the backroads today, intent on seeing the impacts of the water, and how the land lay in general.  My destination was the bootheel of Missouri, a geographic oddity that puts some portions of Arkansas west of their “northern" neighbors in Missouri.

I turned off Interstate 55 onto Arkansas 181 and wound my way through Keiser and Manila, and past signs pointing out numerous small towns, including those named for the daughters of a planter from many years ago.  Finally, I turned due north toward my destination: Senath, Missouri. 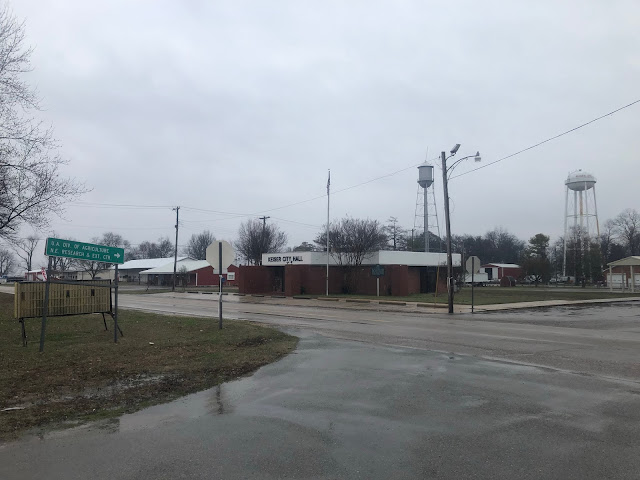 Turns out that Missouri Hwy K effectively ends at Hwy 164 . . . although the gravel county road that clearly ran straight to Senath was tempting, it would have been more tempting on a hot July day, and my white Tahoe would likely have been caked in dust before I got where I was going.   So I reluctantly turned west on 164, north on 108 and ran into a broad swath of 412 that took me into Senath on a dryer, more predictable road.

Cotton is still king in the SW corner of the Missouri Bootheel.  Numerous operations ranging from gins to storage facilities to dealerships offering space-ship like multi-row cotton pickers made it clear to even the most casual observer that this was still cotton country.

Returning home after a day of meetings, I followed roughly the same path, and noted several larger ditches that would eventually flow into rivers like the Little River, the St. Francis, and the Tyronza, all destined for the Mississippi.  These cycles of rain and flooding and drought have all contributed to the abundance of rich delta soil that supports not only cotton, but soybeans, milo, and rice, crops from which our farmers extract a living.

Unlike Desparado’s bleak message, a day in the delta when "the sky won’t snow and the sun won’t shine" probably just means a day of much needed soaking winter rain.  Let us be grateful.
Posted by ArkansawRiverWriter at 4:41 PM

Thank you for taking me back home this morning! You were awfully close to the Bat Cave:))

Enjoy reading this. I live in Osceola,work at American Greetings. Been there for almost 55 years.